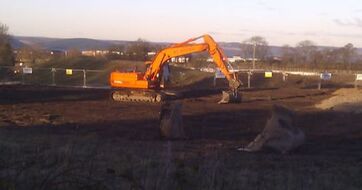 Case Study 1 - An Englishman, Welshman & Irishman went into...
...a site in Scotland to eradicate some stands of Japanese Knotweed. In this 'international' project the english and welsh were represented by staff from knotweed specialists GroundCoverDBM, working on behalf of irish civil engineering contractors Wills Bros for scottish client Highland Council. The project, in Inverness, was GroundCover's most northerly yet. Knotweed eradication using our Klaro on-site process will facilitate a new road junction being built as part of the University development.
​
GroundCoverDBM works throughout the UK, because knotweed is found throughout the UK, but unlike knotweed we do not shut down for the winter - just the rugby internationals!
Case Study 2 - Knotweed eradication clears way for school
GroundCoverDBM's on-site eradication services proved invaluable to main contractor Balfour Beatty when they found knotweed on the site of a secondary school renewal project in Southwark, south London. Our survey identified 425m³ of infested material which would have been removed to landfill at great expense, but using Klaro gave a significant cost saving AND avoided HGV movements in central London during the Olympic period.
​
GroundCoverDBM moved its specialist equipment into the site in the middle of the night to avoid the lorry ban. The work was then completed on schedule, allowing construction to proceed to plan. Our site report and eradication plan were used by the main contractor in support of his BREEAM assessment. 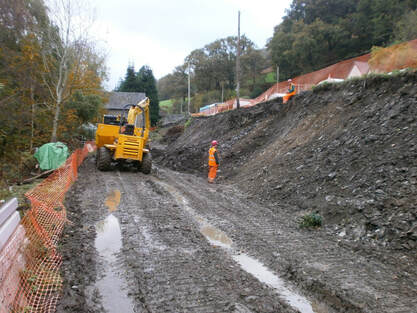 Case Study 3 - Knotweed in the way
Widening the narrow A487 trunk road meant removing stands of Japanese Knotweed from a very narrow project corridor, squeezed between houses, a railway line and protected wildlife sites. Removing the infested material to landfill meant haulage across Wales at huge cost. Main contractor Carillion came to GroundCover for help.
​
Using our Klaro process, we excavated the knotweed stands and processed the infested material which Carillion could then re-use. The work was carried out alongside the road without further disruption to the traffic or to the railway, and the site was handed back to Carillion for the next phase of work. 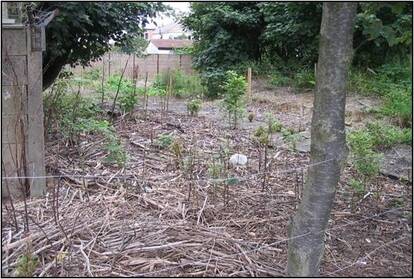 Case Study 4 - Knotweed removal clears way for new Health Centre
Japanese Knotweed was growing in a number of locations on a small site alongside main road into the town.  The architects contacted GroundCoverDBM for help, as  there was no space to reposition the building.  Adjacent houses, an electricity main and roads on three sides meant that there was no room to relocate the knotweed or construct a disposal cell.  The cost of removing approximately 800m³ of knotweed-infested soils to a licensed landfill was prohibitive.

GroundCover DBM excavated the infested material and processed it using our Klaro process. The processed material was used to backfill the voids.  Where the electricity main prevented excavation, a root barrier was inserted to protect the cable and the site.
​
By solving the problem in two weeks, at less than half the cost of landfilling, GroundCover DBM helped keep the project on programme and budget.  800m³ of waste generation was avoided, and over 2 ½ tonnes of CO2 saved. 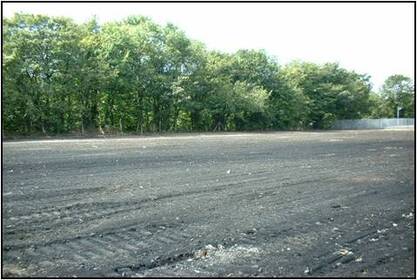 Case Study 5 - Fast turn around enables business park development
The area of land earmarked for development into a Business Park has suffered from years of neglect. Surveys identified 10 stands of Japanese Knotweed, 3 in the Phase 1 area. The cost of disposing of the Japanese Knotweed-infested soil to the nearest licensed landfill, some 100 miles away, was calculated as £300,000. Contractor Alfred McAlpine approached GroundCoverDBM for a solution.

Using our Klaro process, we cleared the first phase in 5 weeks, allowing the development to proceed on schedule. The mobility of the processing unit allowed GroundCoverDBM to reschedule and relocate work to accommodate the main contractor’s changing programme, without additional cost. A 3 year herbicide treatment programme for stands on later phases will achieve eradication at modest cost.
​
Our solution avoided some 650 lorry movements through the town, saved some 65 tonnes of CO2 emissions, and cost less than half as much as the ‘dig and dump’ option. 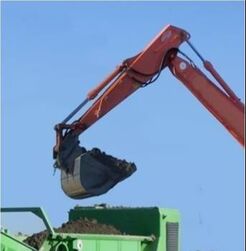 Developer Bovis LendLease has a company target to reduce overall carbon emissions by 20% (based on 2008 baseline) and waste by 70% (based on 2007 baseline) by the end of 2010. Taking the material to landfill would work against both of these targets and so an on-site, rapid solution was needed. Bovis LendLease turned to GroundCoverDBM and its Klaro process.
Working within our EA Licence and BLL’s site working procedures, GroundCover has treated over 5000 m³ of excavated soils. Following third-party testing the soils have been moved to a designated fill area within the works site.

GroundCoverDBM carefully recorded the transport of plant and personnel, fuel use and outputs as part of BLL’s SMART environmental recording. The figures showed an overall saving of 51.32 tonnes CO2 - a reduction of 75% from the landfill alternative. ‘Your work really assists us in achieving our overall objective as well as reducing nuisance to the local community by removing unnecessary vehicles from the road.’ Senior Sustainability Manager, Bovis LendLease.
​
Our work also assisted with the Code for Sustainable Homes assessment, forming part of the presentation to the Considerate Constructors Scheme monitoring assessment. The monitor was very impressed with efforts made to reduce emissions and nuisance, such as the Klaro process. ‘Overall we are very pleased with the process and the resulting reduction in cost and environmental damage achieved and would be keen to promote its use on other sites where Japanese Knotweed requires treatment.’
Copyright 2020 Groundcover DBM Ltd